In 1968, Edmund Muskie was the Democratic candidate for Vice-President running alongside Hubert Humphrey for President. The Muskellunge, also called a “muskie” is an apex predator fish native to the upper mid-west North America. Politician/apex predator, is this just coincidence or some cosmic revelation?

One of the “Age of Aquarium” series 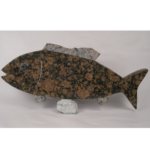