There is no record of the first human to “discover” the planet Mars because it’s been prominent in the night sky since the dawn of time.     It was first known as “Ares” by the Greeks, named for their god of war, then later renamed “Mars” by the Romans for their god of war.

It’s therefore not surprising that the human species having spent centuries waging war against itself is now working diligently to colonize Mars (or Ares). 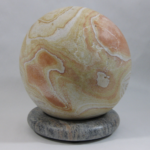 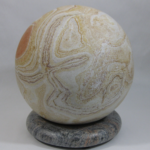